2021 wasn’t quite as epic for me in terms of reading as 2020 was, but it came close. I decided to start working through the ten year Great Conversations reading plan, and read everything in year one. I had a big list of biographies to work through, and finished most of them. Topics as varied as the history of Idaho, playing chess, sociology, and hunting were all included in the broad range of books I read this year. In the end I read 104 books (including listening to 26) totaling 9,634,908 words.

It’s always hard to narrow down such a list of books, almost all of which I enjoyed and learned from, to a selection of the best of the year. The below are the books that I ended up choosing, but as usual, there are plenty of others worthy of mention. Follow me on Goodreads if you want to see more. 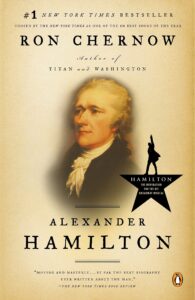 After reading a biography of every US President in the last two years, it was a natural extension to start reading about some of the other most notable figures in US history who weren’t ever President. MLK, John Marshall, Ben Franklin, and Fredrick Douglas are all on the list. Hamilton was easily the person I wanted to prioritize first. Ron Chernow’s biography of him is nothing short of a masterpiece.

The saying goes that “Washington was the father of the country, Madison the father of the Constitution, and Hamilton the father of the government.” This couldn’t be more true. His work directly created the financial and bureaucratic workings of our government. Even though I’m a fan of limited government, I have no qualms about saying he was a more important figure in American history than at least half of our presidents, maybe more. Aside from his work building the federal government in its infancy, his writings have turned out to be some of the most durable pieces on the theory of government, and are still influential to this day. 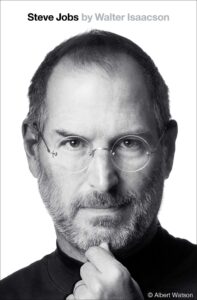 To call Steve Jobs a flawed genius is an understatement. On the one hand, he completely revolutionized more than half a dozen different industries. On the other, he was so self destructive that he cut years off of his own life. He regularly berated his employees, family, and friends with torrential rages that no one should have to deal with. I will admit that I don’t view Steve Jobs as someone to emulate in most aspects of life. But there is still a tremendous amount to learn from him, and he was absolutely fascinating to read about.

Jobs and Apple were some of the biggest inspirations to me when I started Upland Optics and thought through our marketing and products. Simplification is the key to elegance and an excellent customer experience. Jobs understood that better than anyone. He took it too far many times in his life and to weird extremes (like having a 14,000 square foot mansion with no furniture, and attempting extreme diets to cure his cancer instead of getting the needed surgery). But he got his message across better than anyone, and created some of the world’s most popular products, because of his incredible focus on simplification.

Think Again: The Power of Knowing What You Don’t Know 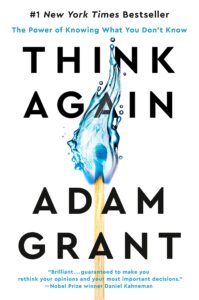 This book hits on a lot of the same themes as the Wait But Why series I raved about in 2019, as well as many others that are very valuable. I enjoyed this book a ton, and ended up with a full typed page of notes from it (a rarity for me, especially for a short book). The core of the book is about how we all need to spend more time rethinking our opinions and views on just about everything. Behavioral biases prevent us from doing so and we get stuck with views long past when we should have them. This book gives us the tools to not only avoid those biases ourselves, but also help others do it and to build environments where this happens automatically.

Some of the most important themes in the book include:

The Psychology of Money 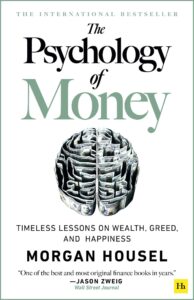 When someone asks me what personal finance books I recommend, for the longest time I always started with The Millionaire Next Door. And while I still highly recommend that book, I’ve found myself more and more often recommending Morgan Housel’s book now. There are a lot of extremely actionable pieces of this book, and some key overall themes that everyone should use when thinking about money. The advice often goes against the grain of traditional financial wisdom. But I appreciate how Housel shares his exact portfolio set up at the end to show that he isn’t just spewing advice without using it himself. One of his most unique moves is he doesn’t carry a mortgage on his house despite rock bottom interest rates, going against what most recommend right now.

The core of the book is really about thinking through finance as a psychological question rather than a mathematical one. Instead of maximizing your portfolio’s return to the highest possible percentage, Housel argues it’s more important to have your portfolio tuned to your own capacity to handle volatility. It’s worth sacrificing some return if you won’t sell out when it inevitably heads downward.

Fighting the Odds: The Life of Senator Frank Church 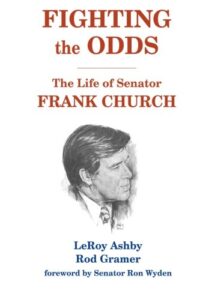 I made a point of reading a lot of books about my home state this year. Idaho has had two senators in its history that have made their presence felt on the national and international stages, and are true legends of that government body. I read biographies both on William Borah and Frank Church, and the one I read on Church is one of the better overall political biographies I’ve read.

Senator Church was a very interesting person for me to study. He represented Idaho in the US Senate for four terms, during which he (much like Borah before him) built a reputation for being fiercely independent and a unique, expert voice on foreign affairs. He was one of the first critics of the Vietnam war, and became the chair of the Foreign Relations Committee.

Church was a Democrat in a state that consistently, then as now, votes Republican. He and I definitely wouldn’t have agreed on a lot of important issues. However, I have to respect the independent streak he had that gave him across the aisle appeal. Rather than ride the party line, he always did what he thought was right. He also did an excellent job of making sure he was connected to voters back home in Idaho. Those two things no doubt led to his four elections (and the fact he barely lost in 1980 during a nationwide Republican tidal wave). Even when the state consistently voted for Republicans for President by huge margins, they also elected Church by similar margins. 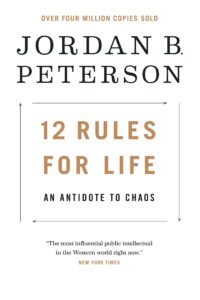 Jordan Peterson is one of the most interesting thinkers of our time, and this mega bestseller was a fantastic read. The rules are each simple, often funny one liners that lead to much bigger discussions of deep, philosophical issues. For example “Treat yourself like someone you are responsible for helping” is a great rule that leads to a deep discussion of how people often neglect themselves but will give a tremendous amount of effort for others, and why they do this. Other great rules from the book include “Compare yourself to who you were yesterday, not to who someone else is today”, “Set your house in perfect order before you criticize the world”, “Assume the person you are listening to might know something you don’t”, and “Do not bother children when they are skateboarding”. Peterson is something of an icon in many conservative circles right now, and it’s understandable as to why. While he may be criticized by some, his logic in thinking through complex issues tends to be incredibly sound and well put.

Death of Expertise – A great reminder that experts, who often get things wrong in individual instances, are on average right more often than those who aren’t experts.

Amazon Unbound – Amazon is of course one of my favorite companies to learn about. This follow up book covers the last ten years of Amazon’s insane growth, as well as the scandals that rocked Bezos personal life.

Comfort Crisis – This book talks about how modern life is too comfortable, and we need to embrace more discomfort to be truly healthy. It uses the story of the author’s hunting trip to Alaska as an example. As a big hunter myself I related to this a lot.

Ruthless Elimination of Hurry – This book teaches simple biblical principles that apply to modern life and are critical. To sum it up: Slow down.

Why Nations Fail – This book examines why nations have historically failed and makes the argument that whenever inclusive institutions (like capitalism and democracy) aren’t the center of civilization, the nation eventually succumbs to failure caused by extractive institutions like communism and authoritarianism.

Will – Will Smith is one of the most famous entertainers of our time, and his story of rough childhood to music sensation to bankrupt to TV and movie star is wild. I listened to the audiobook of this one, which the author reads in his typical entertaining fashion.

Capitalism in America: A History – Greenspan was chairman of the Fed during some very prosperous years, and I enjoyed his views on how American capitalism has been so strong for so long.